Abstract: The relationship between cranial morphology and diet has long been investigated in bats. Bats of the genus Myotis include insectivorous, facultatively piscivorous, and piscivorous species. We tested the hypothesis that facultatively piscivorous (five Myotis species) and piscivorous species (M. vivesi) present cranial morphological and functional changes with respect to insectivorous taxa (16 Myotis species). Cranial shapes in skull and mandible modules were described with four geometric landmark configurations in these dietary groups. Gape capacity was measured with the stretch factors for temporal and masseter muscles. Geometric configurations from two skull and two mandible shapes were analyzed to detect differences in cranial morphology in relation to diet. Differences in cranial morphology were found between piscivorous and insectivorous species involving the mandibular process where masticatory muscles are attached. Linear regression analysis of Procrustes distances and gape capacity showed that the shape of the mandibular process region was highly correlated with the stretch factor of the masseter muscle in piscivorous and facultatively piscivorous species. These results suggest differences in cranial morphology and performance among diets but the hypothesis of gradual changes in cranial shape among diets was only accepted for the mandible and not for the skull. Myotis vivesi appears to improve mechanical advantage of masticatory muscles at lower gapes, presumably allowing more efficient chewing of slippery prey. 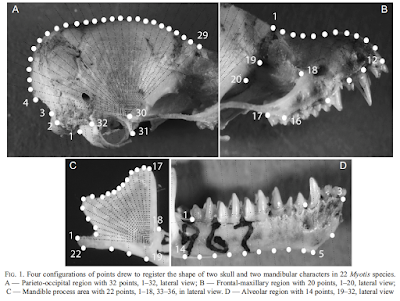 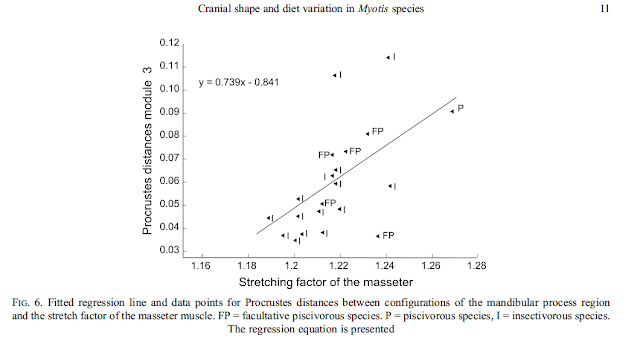